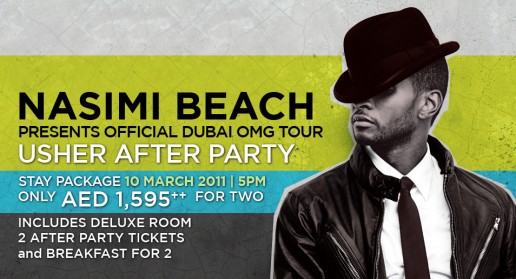 Atlantis, The Palm invites fans of the ‘King of R&B’ – Usher to party with the music icon himself at Nasimi Beach at the “After Party with Usher” on 10 March from 9pm to 2am.

Usher fans can take advantage of the special Usher After Party Package from Atlantis and stay for AED 1,595++ per room per night, which includes two tickets to the “After Party with Usher”, breakfast for two, unlimited access to Aquaventure, the region’s largest water park and The Lost Chambers, an underwater discovery of 65,000 marine life.

Usher is one of this generation’s greatest entertainers.  At 31 years old, he ranks as one of the world’s best-selling artists having sold over 50 million albums and won 17 Billboard Music Awards, nine ASCAP awards, eight Soul Train Music Awards and five Grammy Awards, among many others.  In early 2010, Usher released his landmark seventh album, Raymond V. Raymond. The high-powered collection explored his newfound status as a single man and father, sold more than 7 million tracks, held the No. 1 spot on Billboard’s R&B chart for seven weeks and spawned a string of international hits, including “OMG” featuring will.i.am.

For booking the Usher After Party package please click here, and for further information please go to www.atlantisthepalm.com .