GUEST BLOG FROM FOODIVA: Flavours Of The Orient at Atlantis The Palm

November is truly alive and kicking at Atlantis, we’re getting into the swing of things with a host of offers and events. Be one of the first to experience our new restaurant YUAN, or bring the family and celebrate the good times with Kaleidoscopes family fiesta. It’s all waiting for you to discover at Atlantis, The Palm.

Chinese – a cuisine of contrasts Who doesn’t love a good Chinese? From a take-away joint or home delivery in our case here in Dubai, to street food and decadent dining, Chinese cuisine is prolific around the world.

The principles It’s a cuisine of contrasts that balances four flavours – sour, salt, bitter and sweet – all in the same dish. Think thinly sliced beef served with black mushrooms, a plum sauce and scallion pancakes. Food is often chopped into diced cubes, julienne strips or slanting slices. Historically this preparation allowed food to cook quickly over embers, but the tradition continues to this day for the spices and seasoning to bind thoroughly, as well as for easy eating with chopsticks, which along with chunky soup spoons are the only utensils on the table.

Most Chinese dishes combine several cooking methods – the most prevalent is stir-frying ensuring ingredients retain their full flavour and nutritional value, but steaming, braising and deep-frying are also common techniques. Artistic presentation is vitally important and achieved not just by appearance with clever food carving and aroma, but through texture and sound. For instance, a soup garnish of crisp, fried rice cakes will add crackle.

Regional variances Contrary to perception, Chinese food varies quite drastically from region to region, like Italian and Indian, with eight diverse cuisines – Anhui, Cantonese, Fujian, Hunan, Jiangsu, Shandong, Szechuan and Zheijang. For the purpose of this column, I will concentrate on the four most influential.

When the Ming dynasty was overthrown many chefs escaped from the capital Peking (now Beijing) to the southern Canton province and hence the popularity of Cantonese cuisine. Rice is abundant in dishes here, as are bountiful flavours, rich sauces and the small hearty dishes of dim sum which literally translates to ‘touch your heart’. These bite-sized portions are either fried, steamed, stewed or baked with the idea that you get to taste a variety of dishes. You may have heard dim sum referred to in the context of Yum Cha dining which means to ‘drink tea’ as a digestive accompaniment.

On the other hand, the northern Shandong cuisine is home to wheat-based dishes like noodles and steamed buns. The hot tropical climate of the west is where Szechuan cuisine originates with lashings of its pepper namesake and fiery hot chillies. The north-western cuisine of Jianshu is also considered influential for its distinctive use of salted dried duck, pork, crab and turtle. And last but not least, let’s not forget China’s well travelled national dish that originates from classical Mandarin cooking – Peking duck, otherwise known today as Beijing duck – whose complicated recipe ensures it’s tricky for us home cooks to replicate.

In China, restaurants will specialise in one regional cuisine, but here in Dubai you will find menus representing dishes from across the country. Atlantis’ new Chinese restaurant Yuan whose name, currency aside, translates to ‘shining peace’ focuses on Cantonese with a peppering of Szechuan. 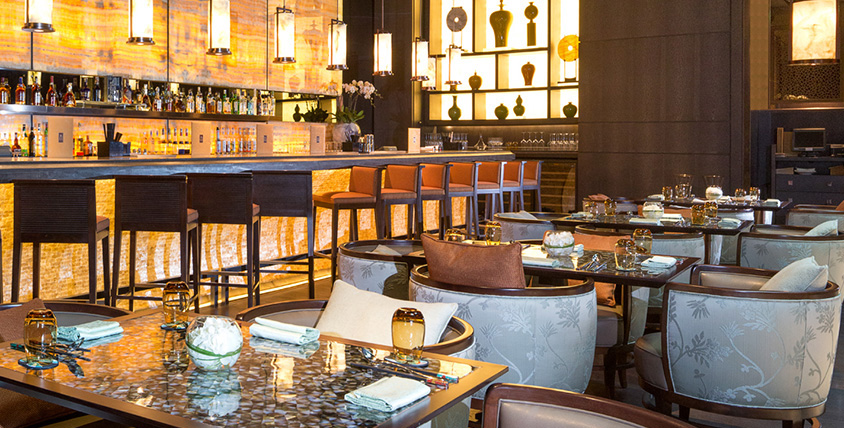 So are you fond of any particular Chinese regional cuisine? What’s your favourite dish?