Guest Blog from FooDiva: The Backstory on Brunch 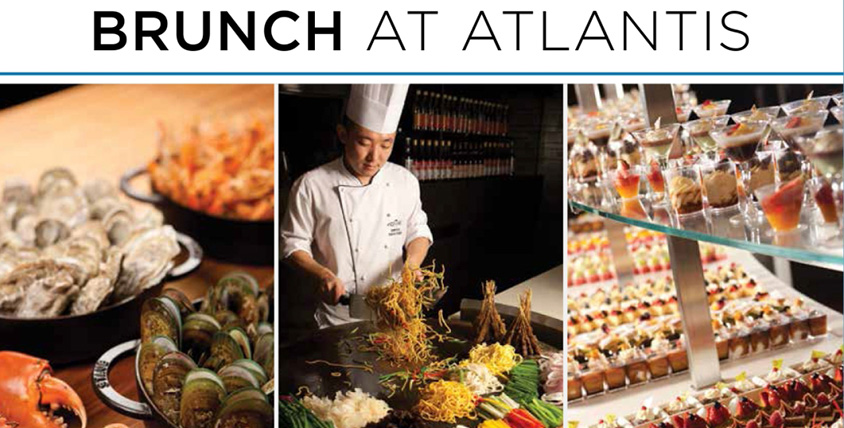 You have  heard all about Friday Brunch in Dubai, but do you know the backstory on this midday meal? Learn more in our most recent instalment from Atlantis, The Palm‘s guest blogger FooDiva:

Sweep away the worries and cobwebs of the week with a Dubai brunch. Is it on your bucket list?

Why is it that brunch here in Dubai is such an institution, more so than anywhere else in the world? I have many friends who religiously book a brunch deal every Friday, and am talking the all-singing-and-dancing (literally), free-flowing champagne variety, not your cheap and cheerful slap-up meal at a neighbourhood café. Some have their favourites. Others pick a different restaurant every week. If the requests I receive for brunch recommendations are anything to go by, this top-of-the-bucket-list experience is not just confined to residents, but holidaymakers and business travellers.

The origins of brunch

Well believe it or not, Dubai has its very own Wikipedia entry under brunch – alongside you’d think New York perhaps, but no rather bizarrely, Canada. No other country or city features. Aside from the obvious breakfast meets lunch combo, where did brunch originate? There are many online references, but it appears the term brunch was first coined in Great Britain in 1895 by writer Guy Beringer who described it as, “Instead of England’s early Sunday dinner, a post-church ordeal of heavy meats and savoury pies, why not a new meal, served around noon, that starts with tea or coffee, marmalade and other breakfast fixtures before moving along to the heavier fare? By eliminating the need to get up early on Sunday, brunch would make life brighter for Saturday-night carousers. It would promote human happiness in other ways as well. Brunch is cheerful, sociable and inciting. It is talk-compelling. It puts you in a good temper, it makes you satisfied with yourself and your fellow beings, it sweeps away the worries and cobwebs of the week.” Brunch initially was championed by hotels since many independent restaurants closed on Sundays – and in the West many still do.

Despite the name combining breakfast and lunch, most brunches here in Dubai (the odd eggs benedict aside) don’t actually dish out breakfast dishes and don’t start serving until noon at the earliest. Traditionally in Dubai, brunches are all-you-can-eat buffet style, but many restaurants now feature endless a la carte options served sharing style, for the same price. Ingredients are top notch gourmet fare from foie gras and Wagyu beef to oysters and Nobu’s famous black cod that every Japanese restaurant has since copied. Creativity shines through with cocktails served in the fruit itself, whether that’s coconut, pineapple or watermelon.

Talking to many a hotelier and restaurateur here, a good brunch has prestige factor, and the one category fiercely contested in the multitude of restaurant awards this town hosts. From a business perspective, food and drink costs are high so it’s not as big a revenue driver as you may think – but it does increase awareness and drive footfall back into the restaurant at other off-peak times.

So one thing’s for sure the trend for brunch in Dubai is only going to hot up. What’s your favourite dish for brunch? Anything in particular you’d like to see served? Where do you head to after brunch?