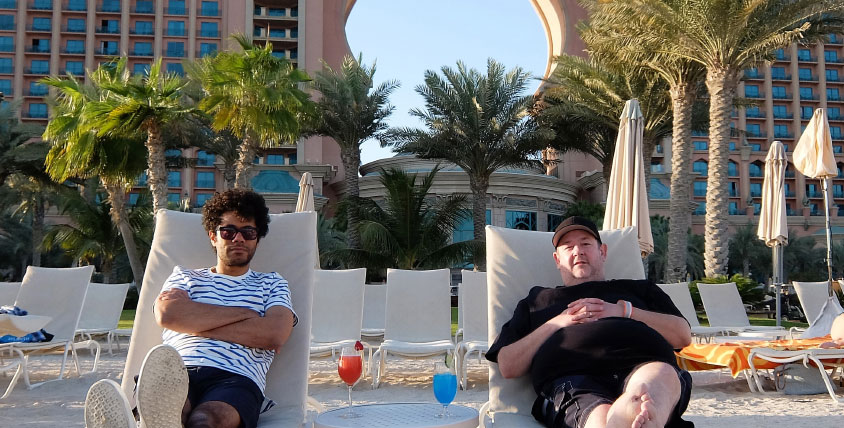 Viewers of Channel 4’s Travel Man: 48 Hours in Dubai are in for a comical treat this week as funnyman Johnny Vegas joins show host, Richard Ayoade in the glamorous playground city of Dubai.

The stand-up comic and Benidorm star makes for an unlikely companion alongside presenter Richard, as the pair explore the best the city has to offer, all within a 48 hour timeframe, residing at the luxurious 5 star Atlantis, The Palm – located on the iconic Palm Island.

Available on 4OD for UK viewers, the show kicks off with a speechless Johnny Vegas being confronted by the resorts priceless Dale Chihuly sculpture in the 60 foot high Grand Lobby, comprising of 10 meters and over 3,000 vibrantly coloured, hand blown glass pieces.

Keen to introduce Johnny to the culinary delights of Dubai, Richard extends an invite to join him on the terrace of one of the resort’s most opulent rooms – the 429 square metre Grand Atlantis Suite. Taking in the breath-taking views of The Palm and Arabian Gulf, the pair indulge in a never ending stream of traditional Arabic cheeses, meat and mezze before heading off to explore the delights of the resort.

Back on the ground, the duo are left transfixed by the largest open air aquarium in the Middle East and Africa – The Ambassador Lagoon. Holding more than 11 million litres of water and home to over 65,000 marine animals including stingrays and sharks, guests can take a white knuckle dive with the predator’s day and at night during feeding time. 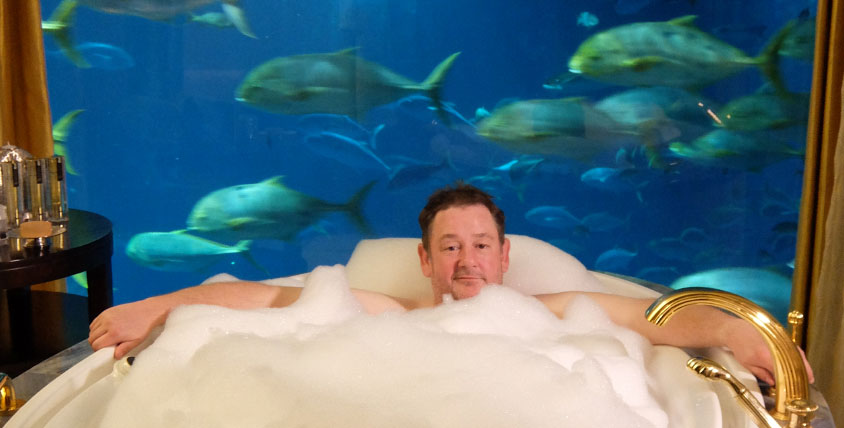 Not one to miss out and clearly inspired by the colourful marine life and water, Johnny is seen heading off, this time not to grab his snorkel, but rather to jump in the luxury bath of the iconic Underwater Suite. At AED 30,000++ per night and boasting floor to ceiling windows, this three story aquatic-themed suite includes underwater views of The Ambassador Lagoon’s 65,000 marine inhabitants, where Johnny sits back among the bubbles.

Finally, in search of a suitable place to sum up the last 48 hours, Richard and Johnny head to the Imperial Club Beach at Atlantis, The Palm. The pair reminisce about their joint adventure and Johnny, clearly overwhelmed by the feat of engineering that is The Palm, is physically motivated to embark on his own structural endeavour.

An alternative to the traditional travel show format, ‘Travel Man: 48 Hours In…’ has been a huge ratings success for Channel 4, with over two million viewers each week and the second series being moved to Channel 4’s coveted Friday night slot.

Taking a ruthlessly efficient approach to travel, each week Richard is joined by a celebrity guest as they are challenged to squeeze the most out of a short stay, in a given destination, in just 48 hours.

Try Dubai like Johnny and Richard and get up to 30% off the best available rate on all room types during your stay at Atlantis, The Palm. Offer includes unlimited access to Aquaventure Waterpark and The Lost Chambers Aquarium. Booking dates: 8 – 30 April 2016 Staying dates: 8 April – 18 December 2016