The Real Housewives of Melbourne Visit Atlantis The Palm 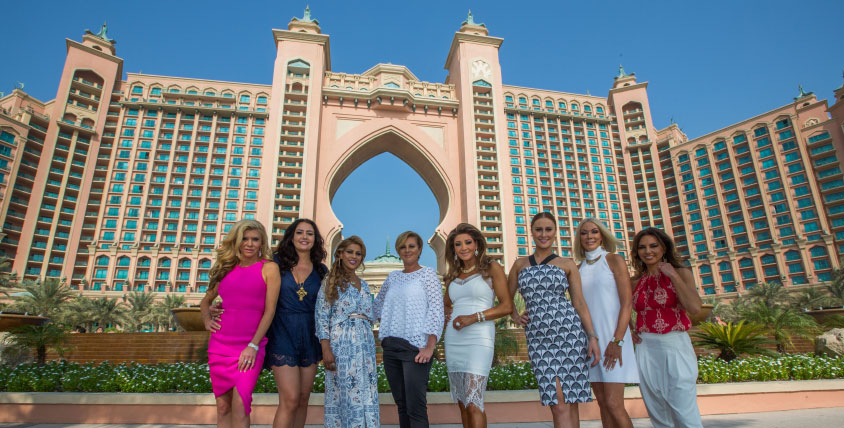 With the third season of “The Real Housewives of Melbourne” in full swing, viewers of the top rated franchise series can watch the ladies enjoying the delights of Atlantis, The Palm during the cast’s trip to Dubai. The luxurious entertainment destination played home to Housewives Gina Liano, Jackie Gillies, Janet Roach, Chyka Keebaugh, Lydia Schiavello, Pettifleur Berenger, Gamble Breaux and newcomer Susie McLean during their glamorous journey to the United Arab Emirates.

Thanks to Chyka’s fabulous invitation, the housewives arrive with wide-eyed wonder in spectacular Dubai. After checking into Atlantis The Palm, their super-opulent digs, they hot foot it down to Nasimi Beach for cocktails. Spirits are high with the exception of one of the wives and it doesn’t take long for cracks to appear in the group. After many trips to the area, Lydia’s keen to establish herself as the resident expert which has the desired effect of rubbing Chyka up the wrong way.

On day two, after fun-filled marine and water park activities with a variety of marine animals, the girls head out to dinner at Ossiano. With a magnificent aquarium wall as a backdrop things are pleasant enough to begin with – but their banter soon turns to bickering when Gina’s friendship with Gamble is put under the microscope. It’s also clear that Pettifleur and Jackie can’t see eye-to-eye on anything right now and they don’t hold back expressing their mutual disdain.

No visit to Dubai is complete without a trip to the desert. A camel ride over the dunes at sunset proves a uniquely wonderful experience for all but one of the women. The final destination is a Bedouin style dinner under the stars where there’s an unexpected surprise for Chyka. As the sumptuous meal progresses two of the wives alienate themselves from the group and eventually just one becomes the target of home truths and accusations which fly out loudly across the moonlit dunes. Even the camels are scared.

Dinner in the Dubai desert continues with temperatures in the sand dunes soaring – Season 3, Episode 9

Back at our desert dinner the housewives try in vain to explain their frustrations to Pettifleur, but their words fall on deaf ears while pushing her to breaking point. With the heat rising Gina loses her cool as only Gina can.

Another day, another opportunity for retail therapy, and this time it’s the more traditional experience of shopping at the Dubai souks. While Jackie, Gina and Susie drape themselves in gold; Janet, Gamble and Chyka sample colourful textiles. But all discuss the same hot topic: Pettifleur! Said hot topic meantime is recovering alone by the beach when Lydia shows up unexpectedly and shatters her precious me-time along with the peace and tranquillity of everyone nearby.

Later, the girls agree they should avoid a repeat of last night’s dinner debacle but things quickly boil over again when Lydia and Pettifleur arrive. A simple apology from an unexpected source brings some much needed peace to the table. But with one fire out, it’s only a matter of time before another flares. Will it be Gamble and Gina going head to head this time or Jackie and Lydia? Maybe it’s both but rest assured, you know things have really hit rock bottom when Chyka the Queen of composure, finally gets angry.

Right now you can enjoy Atlantis, The Palm the way the Real Housewives of Melbourne did with unlimited access to Aquaventure Waterpark and its private beach as well as access to The Lost Chambers Aquarium at the Best Available Rate.