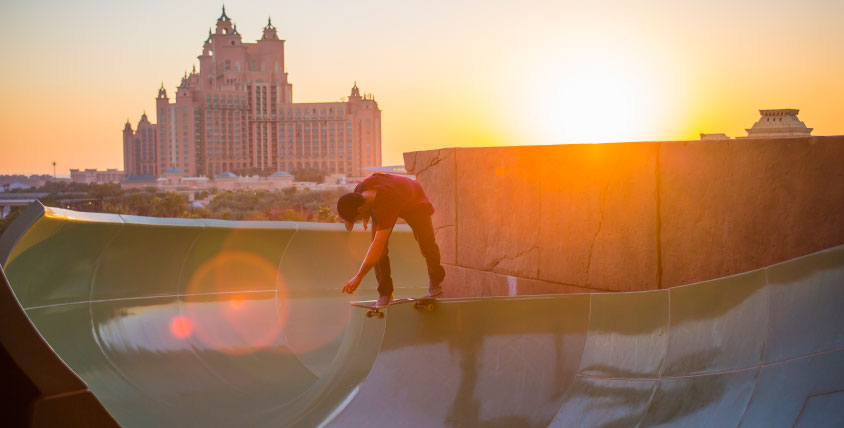 Recently, Aquaventure Waterpark was taken over by three world class skateboarders, playing host to a rare riding experience. The awe-inspiring stunt captured never-before-seen skateboarding footage as the group Flipped, Grinded, Dropped and Ollied their way through the number one water park in Europe and the Middle East. #waterparklockdown

18-year-old Alex Sorgente of Italy, 19-year-old Jan Hoffmann of Germany and the United Arab Emirates, and 25-year-old Milton Martinez of Argentina, had full reign of The Tower of Poseidon, which was drained of 100,000 litres of water and rises over 130 feet above the water park.

From a height of 25m above The Palm – more than six story’s high – the trio skateboarded down the 156-metres of serpentine twists and turns of Zoomerango, before taking on its 14-metre wall. They then whizzed their way down Aquaconda at speeds of over 35 kilometres per hour, skating up to the edges of the 9.2m-wide pipes, catching glimpses of Dubai from the open sides before disappearing down tunnels and vertical banking of 4.6 metres.

Atlantis, The Palm is home to the 17 hectare and award winning Aquaventure Waterpark including the Tower of Poseidon and Tower of Neptune, 4.5 hectare Dolphin Bay and Sea Lion Point, 11 million litre Ambassador Lagoon, 2 guest pools and The Lost Chambers Aquarium. Containing 18 million litres of water, a huge variety of thrilling waterslides, a 2.3 kilometre river ride and animal encounters, the park has recently been voted one of the best in the world. Resort guests of Atlantis also have unlimited complimentary access to Aquaventure Waterpark.

Some interesting facts about Aquaventure Waterpark:

The best way to truly discover the adrenaline rush and all that Aquaventure Waterpark has on offer is come and visit for yourself.