Top 10 Facts About Atlantis, The Palm

Discover Atlantis The Palm – Dubai’s iconic five-star hotel and luxury resort, and explore some fascinating hotel facts and interesting trivia about the size of Atlantis, its Signature Suites, Atlantis restaurants, Aquaventure Waterpark, and the marine life at The Lost Chambers. 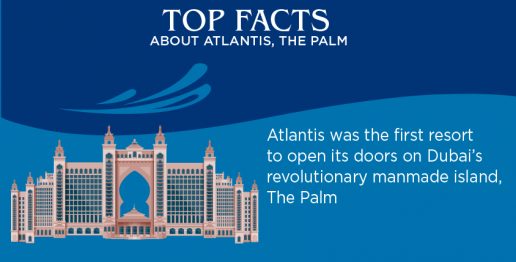 Atlantis was the first resort to open its doors on Dubai’s revolutionary manmade island, The Palm

As the world’s largest artificial islands, The Palm is composed of Palm Jumeirah, Palm Jebel Ali and Palm Deira. The world saw the Island’s first ever resort, Atlantis, The Palm open its doors to the public in late 2008. The ultra-modern luxury resort and a five-star hotel in Dubai harmoniously blend both magnificence and Arabian ingenuity and is themed around the mystical city of Atlantis. 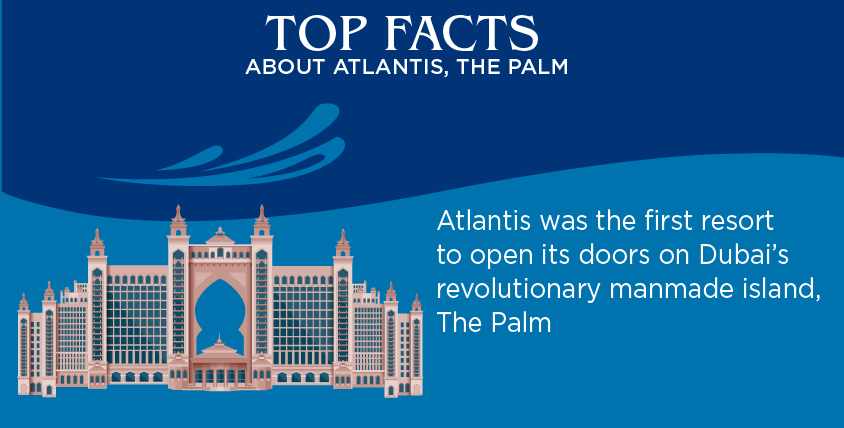 Any thoughts on the resort’s size? Well, it is not difficult to imagine just how big Atlantis is. If you want to feel small and get an idea of the overwhelming scale of the resort, it is roughly the size of 64 Wembley football pitches.

A suite more coveted than any other in the region is Atlantis’ Royal Bridge Suite. At USD $27,000 per night, the ultra-luxury penthouse links the resort’s two towers and offers a personal butler at your beck and call, private spa treatment room, bespoke furnishings, three spaciously luxurious bedrooms with sweeping views of the Palm and the Arabian Gulf. 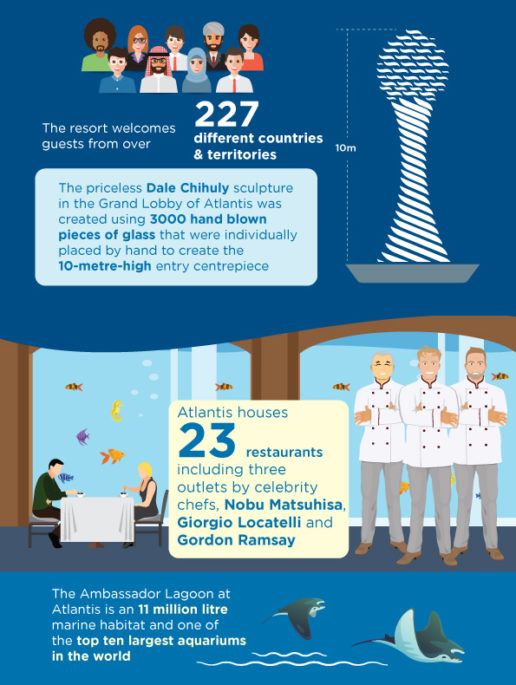 The resort welcomes guests from over 227 different countries & territories

As a dream destination, Atlantis sees tourists pouring in from across the world for its unique location, all-inclusive resort features, family-friendly attractions and, of course, the sheer luxury that is affordable yet unlike any other.

Atlantis sets a welcoming tone for its guests with several decorative articles and details. One that is hard to miss is a large sculpture made up of 3,000 hand-blown coloured glass pieces that adorn the entrance of the grand lobby of Atlantis. Designed by renowned American glass sculptor, the 10-meter-high glass centrepiece is intricate, yet whimsical to look at.

You can savour the best of Dubai’s multicultural dining scene at Atlantis restaurants thanks to the culinary mark left by the movers and shakers of the food world, such as Nobu’s Nobu Matsuhisa, Ronda Locatelli’s Giorgio Locatelli and the multi-Michelin-starred celebrity chef Gordon Ramsay to name a few. 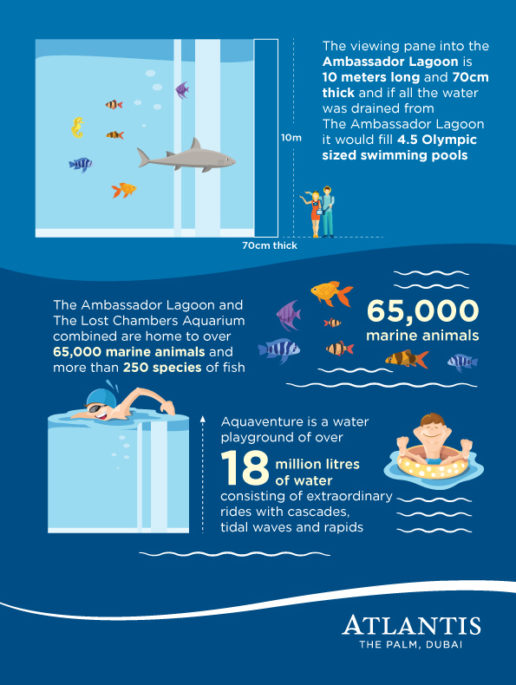 The aquarium is home to exotic marine beauties of all colours and kinds, and the 10-meter-long viewing pane gives ample views of the marine ecosystem inside.

The Ambassador Lagoon and The Lost Chambers Aquarium combined are home to over 65,000 marine animals and more than 250 species of fish

Atlantis has the portfolio of the world’s most popular aquarium experience with The Ambassador Lagoon, which forms a part of The Lost Chambers Aquarium. With a series of mazes of underwater tunnels themed around the ruins of the mystical city of Atlantis, The Lost Chambers lets you explore its diverse marine inhabitants.

Aquaventure is a water playground of over 18 million litres of water consisting of extraordinary rides with cascades, tidal waves and rapids

One of the first things to do in Dubai while holidaying at the resort, is to enjoy some splashing fun at Aquaventure Waterpark – the best waterpark in Dubai and the only waterpark in the Middle East to offer marine animal experiences including, Shark Safari and Cownose Ray Feeding along with a range of thrilling water slides, rapids and river rides.