A great range of food and drink events take place throughout the year in the UAE, but never before has a pop-up culinary event seen the cuisines of Italy and Japan collide harmoniously in one night, like the first one-off Four Hands dinner event at Atlantis The Palm that was held on 16 November as part of the much-talked about Culinary Month – the culinary rendezvous of the year that all dining aficionados and gourmands have firmly marked in their diaries. 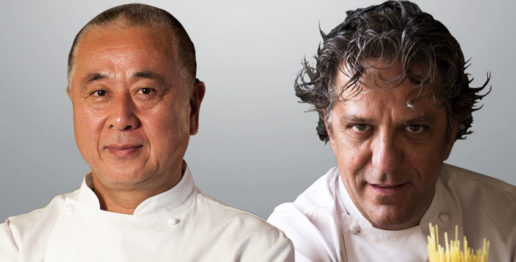 Hosted by celebrity chefs Nobu Matsuhisa of Nobu and Giorgio Locatelli of Ronda Locatelli, the unique Four Hands dinner welcomed diners to a specially curated Japanese-Italian six-course fusion menu celebrating the best of their respective cuisines, in addition to their love for fresh produce, varied seasonal ingredients and palate-pleasing flavors.

The star of the fusion menu at the event was the intoxicating fall delicacy, fresh white truffle. Alluded to their divine earthy aroma and intense flavor, white truffles have often been unceremoniously attached to Italian cuisine, and highlighted the chefs’ mash-up of local Italian and Japanese fare. The Truffles Menu saw a delicious line-up of six courses that had alternating dishes created by the chefs. Giorgio presented his signature dish Beef Tartare with Quail’s Egg and White Truffle, Egg Yolk and Potato Ravioli with White Truffle, Pan Fried Veal with Potato Cake, Wild Mushrooms and White Truffle – while Nobu served a selection of Sushi and Cutrolls, Chilean Sea Bass Dashi Ponzu with Truffle, and Tofu Tiramisu to eager diners.

Nobu – being an authority on Japanese cuisine and the owner of one of the most recognized Japanese restaurants in the world and Giorgio – having been at the forefront of Italian dining scene and the driving force of the best Italian restaurant in Dubai, shared such a strong culinary connection, which was evident in the way they contributed their own creative creations to the menu.

Both chefs talked about a lot of common ground between Italian and Japanese cooking styles during this exclusive Atlantis event, with Nobu calling it ‘an international marriage’, a phrase he coined to describe the confluence, and emphasized their love for simple cooking using fresh ingredients.

Make sure to visit Atlantis restaurants to savour two of the most tantalizing occasions of the year – Atlantis Restaurant Week and Cirque De Cuisine – that will mark the finale of the Culinary Month activities at Atlantis, The Palm.