Serving You the Extraordinary with a Special Atlantis Takeaway Box

The best part of every meal at Atlantis restaurants in Dubai is knowing that every mouthful of their culinary creations is out-of-this-world and the chefs behind them are always serving you the extraordinary.

This rings especially true for few lucky Dubai residents, who won a free meal at the best Italian restaurant in Dubai and a surprise pay-off, upon ordering a special take-away box! 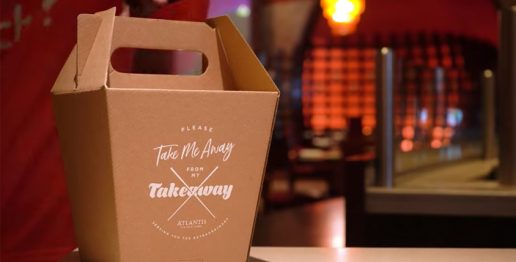 During the month of September 2017, Atlantis The Palm launched ‘Serving You the Extraordinary’ campaign where customers who ordered a special Atlantis Takeaway Box free of charge via Zomato app could stand a chance to win a complementary dinner at Michelin-starred celebrity chef Giorgio Locatelli’s Italian restaurant in Dubai, Ronda Locatelli.

How Atlantis Takeaway Box Took Dubai Diners Away from Their Takeaway

The unique takeaway box featured a tablecloth that folded out into the World map, along with figurines that represented food ingredients (sourced from all over the world) used by Ronda Locatelli in Atlantis, The Palm.

The recipients were instructed to place the figurine on the map to identify where the ingredients for Ronda Locatelli had been sourced from and share a photo of the map on Instagram using the hashtag #servingyoutheextraordinary.

Few were lucky to win a complementary dinner at Ronda Locatelli in Atlantis. The restaurant took things a step further, giving them a special surprise – an all-expense-paid trip to Umbria in Italy for a highly coveted authentic Italian dining experience with celebrity chef Giorgio Locatelli himself. The Atlantis Takeaway Box to Ronda Locatelli was designed to offer diners more than just a takeaway, by connecting them with the chef-owner Giorgio Locatelli and his love passion for Italian cooking. He welcomed the diners for a unique dining experience in Umbria, Italy to showcase Ronda Locatelli’s selection of freshly picked ingredients, including seasonal vegetables, truffles and free-range grass-fed meat produce, to create a variety of Italian dishes.

The diners were escorted to tour Locatelli’s very own truffle reserve and were offered to pick the famously earthy high quality truffles used in Ronda’s dishes, followed by a visit to the oldest region of Italy – San Pietro, where they learnt about all of the fresh ingredients used in Ronda’s culinary creations that set it apart from other restaurants.

Serving You the Extraordinary at Ronda Locatelli in Atlantis, The Palm

Having been at the forefront of Italian dining scene and popularly known as the grandmaster of Italian cuisine, Michelin-starred celebrity chef Giorgio Locatelli is associated with bringing fresh ingredients and simple flavours of Italy to the traditional pizza brick-oven environment in his restaurant in Dubai.

The genuine flavours, taste and wholesomeness of a meal prepared with the freshest of ingredients, are incomparable. And what’s even better is the feeling that you get when you know you are eating fresh, responsibly sourced food.

At Ronda Locatelli, the menu has delicious food recipes created using responsibly sourced high-quality ingredients that have travelled a long way from all over the world to get to your plate. In chef Giorgio’s own words, ‘Eating at Ronda Locatelli is like eating a piece of Italy’.

Take a look at how Atlantis’ Ronda Locatelli in Dubai is serving its guests the extraordinary.