Whether you are just visiting Dubai or you have lived here your whole life, an afternoon spent at Atlantis The Palm’s The Lost Chambers Aquarium and The Ambassador Lagoon will be an experience you’ll never forget.

Wonder in amazement as you tour these one-of-a-kind destinations and two of the most popular family attractions in Atlantis, The Palm. 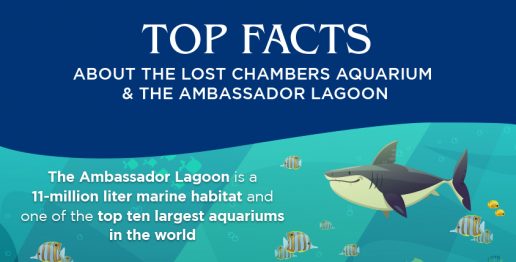 Here are some mind-blowing details and the top fun facts about The Lost Chambers Aquarium and The Ambassador Lagoon for you, ahead of your visit: 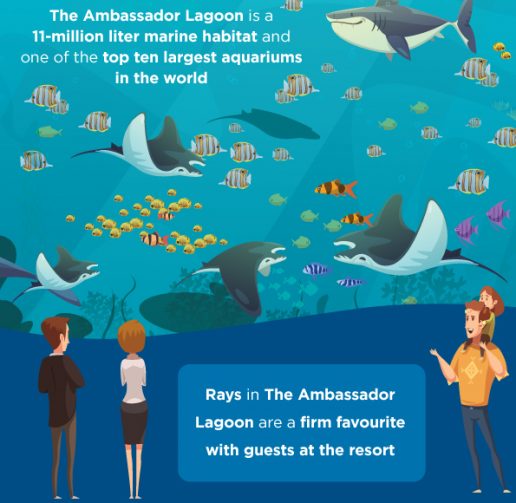 1. The Ambassador Lagoon is a 11-million-liter marine habitat and one of the top ten largest aquariums in the world

As one of the top 10 largest indoor aquariums in the world, Atlantis Dubai’s Ambassador Lagoon is one of the landmark attractions in the UAE and is home to over 65,000 species of fish and mammals. The aquarium holds 11 million litres of salt and fresh water; enough to fill more than four Olympic-size swimming pools!

2. Rays in The Ambassador Lagoon are a firm favourite with guests at the resort

With many different species of rays in The Ambassador Lagoon, they are a firm favourite with guests. Rays are amongst the oldest surviving group of jawed vertebrates, first appearing in the fossil record during the Lower Jurassic (about 150 million years ago) and during the Ancient Greek times, dentists used the venom from the stingray’s spine as an anaesthetic.

3. Atlantis has a special programme where seahorses are bred in the Atlantis nursery and the Fry are released back into the sea

Adding to its intrigue, the aquarium has an efficient breeding programme in place for seahorses. It requires a massive amount of time to raise fry successfully and each batch of fry once born are released into the sea.

4. Thousands of moon jellyfish are bred each year in the nursery of The Lost Chambers Aquarium, with many being released back into the Arabian Gulf

A sting from a Moon Jellyfish may hurt but it won’t be fatal. Typically, there is pain and a small rash that is red and swollen. However, many people don’t even know that they have been stung by one since they don’t penetrate well through skin.

5. The fish family in The Ambassador Lagoon have their favourite dishes

Did you know that the inhabitants of The Ambassador Lagoon are hearty eaters and have specific fish food that they enjoy eating? The baby White Tip Reef Sharks love Milkfish, Angelfish devour Romaine Lettuce and Bowmouth Guitar Sharks love Blue Crab.

6. The Ambassador Lagoon and The Lost Chambers Aquarium combined are home to over 65,000 marine animals

7. The fish that call Atlantis, The Palm home are fed 472 kilos of restaurant quality seafood daily

While it is fact that Atlantis’ marine inhabitants love to eat, the most popular seafood includes shrimp, krill, squid, mackerel, anchovy and other varieties of fish and romaine lettuce – each day, meticulously prepared in the food preparation area. To put this onto perspective that’s one and a half times the amount of seafood Nobu serves in total per week…. just in one day!

Make the most of your day visit to these attractions with Atlantis Dubai Offers; grab special discounts on any Atlantis underwater adventure of your choice!

Like these facts? Take a look at the full Atlantis Dubai Aquarium Facts Infographics.

Discover why You are Different in Water at Atlantis, The Palm

Enjoy Amazing Benefits When You Book Directly with Atlantis, The Palm