Design and Art at Atlantis, The Palm 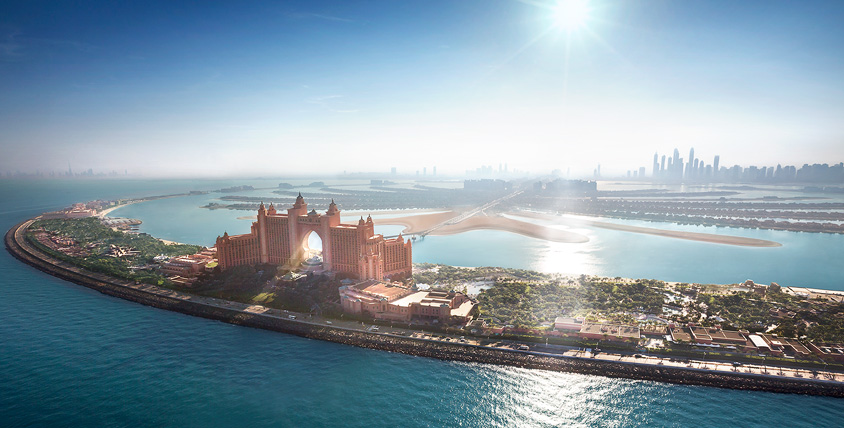 It was always Atlantis, The Palm’s Executive Chairman Sol Kerzner’s vision to transport guests into a dazzling, imaginative world when they come to visit this famous resort atop the crescent of the Palm Jumeirah in Dubai.

Set on 46 hectares and with 17 hectares of water themed amusement rides and slides at the Aquaventure Waterpark, Atlantis boasts fresh and salt-water pools, lagoon exhibits, an open-air marine habitat and extraordinarily luxurious accommodations in over 1 500 rooms and suites. But it’s the awesome architecture and interiors that often cause guests to whip out the cameras.

Kerzner’s brief to the designers was to ‘come up with something that captured the essence of Altantis – the wonder, the water and the sense of discovery – yet with distinct Arabic elements. The result was sun-kissing spires, Moorish archways, Arabian-inspired lamps and palm-shaped pillars tied together with accents of traditional Middle Eastern vernacular architecture such as hand-wrought iron columns of flowers, leaves and buds.

The interior designers who had the task of transforming the structure into an aquatic Lost Continent of Atlantis were Wilson and Associates, design architects Wimberly, Allison, Tong and Goo and the innovative landscape architecture design firm EDSA.

Using the theme of crystal and light energy, designers were able to incorporate moments of unexpected wonder throughout the resort. Look around and you’ll notice shimmering semi-precious stones and intricate fossilised shell and fish stone combined with classic Arabian architecture, custom-crystal chandeliers and shimmering hand-embroidered silk fabrics. Put together, it creates a sense of awe and opulence that has made Atlantis, The Palm the third most Instagrammed hotel in the world in 2015.

American artist Dale Chihuly created the famous glass sculpture in the lobby at Atlantis, the Palm. The impressive piece of art, which is surrounded by a reflection pool, brings the essence of the ocean and its inhabitants to life. It took two years to complete, is made up of over 3 000 pieces of vividly-coloured blown glass ranging from fiery oranges and reds to tranquil blues and greens.

Spanish artist Albino Gonzalez hand-painted the eight incredible murals that cover the main lobby in Atlantis, The Palm, telling the story of the ancient mythical lost city around a solar calendar.

Atlantis, The Palm is adorned by hundreds of artworks, most of which were created by San Francisco mural artists Mark Evans and Charley Brown. They created panels for seven domed ceilings – some of which are 2,000 square feet and can be seen in the Tower of the Moon, Tower of the Sun and the Garden of the Sea – as well as other imagery and faux tapestries for the resort’s public spaces.

When you come to stay with us at Atlantis, The Palm, take a moment to discover the amazing detail that has gone into transforming every section of the resort into a work of art.