Millions of guests from more than 227 different countries and territories vacation at Atlantis, The Palm each year for a host of reasons. One of them being the fact that Atlantis is home to the largest offering of award-winning fine dining restaurants anywhere in the Middle East! 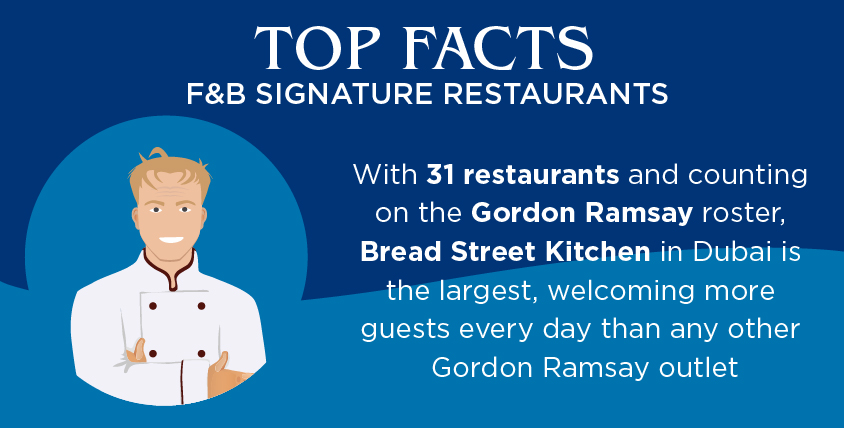 Let’s discover top facts about Atlantis’ signature restaurants – Bread Street Kitchen, Nasimi, Nobu, Ossiano, Ronda Locatelli, Seafire Steakhouse and YUAN – that differentiate them from the rest and learn a little bit about their Chefs de Cuisine, who also happen to be the crème de la crème of the culinary world: 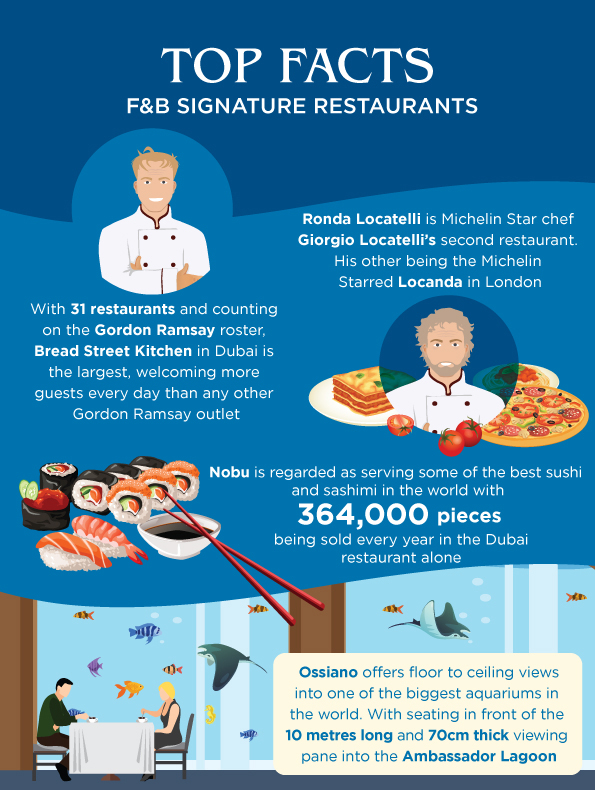 1. Ronda Locatelli is Michelin star chef Giorgio Locatelli’s second restaurant. His other being the Michelin starred Locanda in London

Ever since Giorgio Locatelli, the Italian celebrity chef & owner of Michelin-starred Locanda Locatelli in London, opened his second fine-dining establishment Ronda Locatelli, he has been at the forefront of Italian dining scene in Dubai. The signature Italian restaurant with its true Italian countryside fare is one of the go-to places for great weekend family brunches in Dubai.

2. Ronda Locatelli chefs prepare over 100Kg of pasta every week and serve 62,400 pizzas every year

The Italian dining sensation seamlessly blends the charm of the Italian countryside resto and its traditional pizza brick-oven environment with the ever-evolving eclectic cosmopolitan nature of Dubai. The chefs at Ronda Locatelli match the restaurant’s food supply and demand by making more than 100 kilograms of pasta every week and dishing out 62,400 pizzas in a single year!

3. Bread Street Kitchen & Bar is named after the street of its London counterpart which sits at number 10

4. With 31 restaurants and counting on the Gordon Ramsay roster, Bread Street Kitchen in Dubai is the largest, welcoming more guests every day than any other Gordon Ramsay outlet

The Gordon Ramsay Group prides itself in owning more than 31 restaurants spanning Europe, The Middle East, Asia and the United States, and has secured seven Michelin stars in total. Bread Street kitchen at Atlantis, The Palm is the biggest of Gordon Ramsay’s restaurant empire. 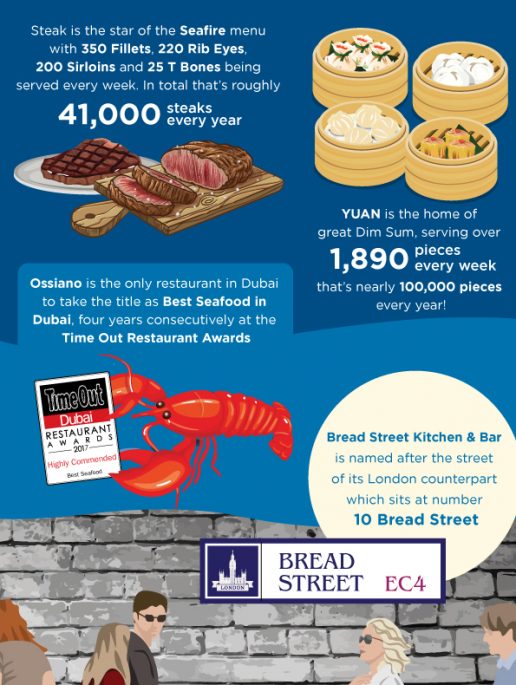 In a classic Ramsay menu, you can expect a variety of meat-heavy options; this is no less true for bread Street Kitchen Dubai. The Chef de Cuisine of Bread Street Kitchen takes care of its patrons’ ‘meaty’ appetite by serving a whopping 200 Beef Wellington’s in a single week!

6. Ossiano is the only restaurants in Dubai to take the title as Best Seafood in Dubai, four years consecutively at the Time Out Restaurant Awards

A fine dining establishment may get some people going, but very few restaurants have the appeal of a unique and lavish fine dining experience like Ossiano. Four-time winner of the Best Seafood Restaurant in Dubai, Ossiano is famed for its mesmerising underwater culinary experience.

7. Ossiano offers floor to ceiling views into one of the biggest aquariums in the world. With seating in front of the 10 metres long and 70cm thick viewing pane into the Ambassador Lagoon

Not only will you celebrate delicious moments in a romantic dining setting at Ossiano, Atlantis’ underwater restaurant that has been serving the best seafood in Dubai, but also treat yourself to the most luxurious underwater dining experience with stunning floor to ceiling views into the Ambassador Lagoon, one of the largest aquariums in the world. 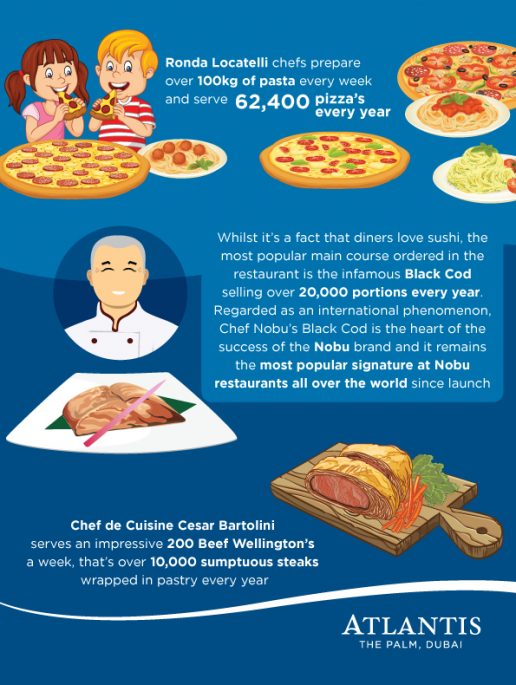 Seafire Steakhouse can make any steak lover feel like a king and satisfy even the most demanding connoisseurs. Seafire Steakhouse responsibly sources the country’s finest steak from Australia; serves roughly 41,000 juicy, sizzling steaks, every single year!

YUAN is an award-winning modern Chinese cuisine restaurant and bar, which is a hit with locals and tourists alike. The restaurant also hosts the best Yum Cha brunch in Dubai, which involves following the Cantonese tradition of drinking pots of Chinese tea and eating flavourful dim sums.

10. Nobu is regarded as serving some of the best sushi and sashimi in the world with 364,000 pieces being sold every year in the Dubai restaurant alone

A favourite with A-listers for the best sushi and sashimi in Dubai, Nobu Dubai at Atlantis, The Palm has been garnering international attention for its well curated, rarified traditional Japanese menu.

11. Whilst it’s a fact that diners love sushi, the most popular main course ordered in the restaurant is the infamous Black Cod selling over 20,000 portions every year. Regarded as an international phenomenon, Chef Nobu’s Black Cod is the heart of the success of the Nobu brand and it remains the most popular signature at Nobu restaurants all over the world since launch

Like these fun facts about Atlantis’ signature restaurants? Take a look at the full Atlantis Signature Restaurants Fun Facts Infographics