Atlantis, The Palm is always bursting at the seams with events and festivities all year round. The year 2017 can be described as a very busy and eventful year not only for Atlantis but also for Dubai as a whole! As we bid adieu to the year and look forward to the one coming up, we take the last few days to look back on the best Atlantis events and festivals in 2017. Here are the monthly highlights of the year handpicked by our concierges. 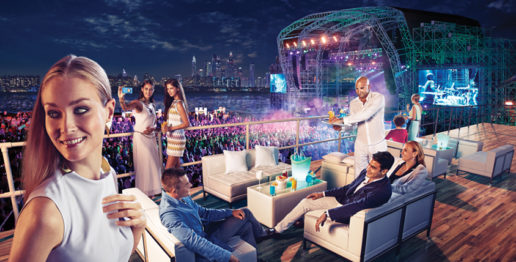 A Russian Christmas at Atlantis Dubai

Once a year, DIAFA honours inspirational global and Arab personalities who exhibit remarkable talent and exceptional vision, and have worked towards significantly improving and supporting the global and Arab communities. Atlantis The Palm hosted the very first edition of DIAFA on 9 January 2017 under the patronage of His Highness Sheikh Mohamed bin Rashid Al Maktoum, Vice president of the country, Prime Minister and ruler of Dubai.

Atlantis The Palm launched Solis DXB 2017, the biggest all-day beach festival ever seen in Dubai, on February 10. Boasting the status as the pilgrimage for dance music fans and one-of-a-kind dance party on the beach in Dubai, Solis brought together all the elements of Electronic Dance Music to Nasimi Beach and took a distinctly flavoured lineup of top names, like Clean Bandit, Showtek, Wankelmu1, XIIAM and David De Luca.

Award-winning chefs, Grégoire Berger of Ossiano and Herve Courtot of Nobu, two of the most formidable players on Dubai’s dining scene, teamed up for an extraordinary “Four Hands” dining experience on March 10 at Ossiano seafood restaurant. Their magical collaboration saw a unique menu created from the harmonious fusion of Ossiano’s fine-dining Peruvian flair with Nobu’s sensational modern Japanese cuisine.

German House music producer, label owner and superstar DJ Robin Schulz headlined the Nasimi Sessions – the best beach music events in Dubai, along with Rudimental – one of UK’s biggest dance music groups, and music producers HUGEL as part of the lineup on March 31 at Atlantis the Palm.

Atlantis celebrated all things chocolate by launching the region’s first ever official Chocolate Week that rolled around from April 17-24. In keeping with the celebration, nine of the Atlantis restaurants served up menus that were awash with the most desired confection. Atlantis also launched the world record attempt for the biggest chocolate sculpture, a replica of The Royal Atlantis Resort & Residences, which is set to open in 2019 in Dubai.

Atlantis The Palm along with 104.8 Channel 4 set a new Guinness World Record for the Longest Underwater Radio Broadcast in the world on May 13. 104.8 Channel 4 Radio host Stu Tolan made a 5:25:25 (5 hours, 25 minutes and 25 seconds) long live broadcast from the bottom of The Ambassador Lagoon at Atlantis, The Palm to achieve this feat.

Atlantis celebrated the holy month of Ramadan by hosting Iftars and Suhoors at Asateer – one of Dubai’s most talked about and sought-after Ramadan tents. Ramadan Asateer Tent offered sumptuous Iftar buffet options and Suhoor á la carte menus, along with a wide variety of festivities during the holy month of sacrifices.

Atlantis The Palm invited guests to partake in its Eid Al Adha celebrations with an array of special Atlantis offers and discounts.

Atlantis set the right tone for a fun and festive Diwali celebration with the Kaleidoscope Diwali Festival. The 3-day fun family event, which ran from October 19-21, was abuzz with plenty of kid’s entertainment, live street food counters, buffet stations and Indian arts & crafts.

Serving you the Extraordinary

Atlantis prepped itself for the Culinary Month by launching ‘Serving You the Extraordinary’ campaign that showcased seven of its award-winning restaurants in Dubai, their chef’s vision, technique, and how they go above and beyond to serve patrons and resort guests the extraordinary.

The Culinary Month was chock full of mouth-watering activities, one-of-its-kind gathering of Michelin-starred celebrity chefs and innovative collaborations in a festive setting at Atlantis restaurants. The month also saw award-winning restaurants serve the best of their culinary creations for a special price during the Atlantis Restaurant Week from November 14-30. The culinary month culminated with the launch of the Christmas edition of Dubai’s biggest and best evening dine-around event, Cirque De Cuisine on December 7 in The Avenues.